Twenty years of LED in the Philippines

Recently, William appeared in the community events section of the Sun.Star Bacolod, a local newspaper from the Negro Occidentale region of the Philippines. He had just finished facilitating a two-day workshop on Local Economic Development (LED) in Silay City, a project funded by UN-Habitat. Here he is in action. 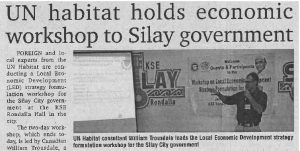 But this is not an isolated event. Over twenty years ago, in partnership with the Canadian Urban Institute, we started development of a highly participatory, strategic planning process for LED. The first pilot for this process was in Iloilo City, Philippines in 1995.

Ten years later, John – again in partnership with the CUI and now funded by UN-Habitat and CIDA – facilitated a 5-day training seminar on strategic planning for LED. By that time, the process that had begun in Iloilo City had become formalized, documented, and was in the final stages of field-testing before being published in 2005 by UN-Habitat as a four-part manual called Promoting Local Economic Development through Strategic Planning. The training program also resulted in the establishment of a regional economic development planning agency and the identification of three top priority economic development actions.

John also made headlines in a local paper during his time in the Philippines – this time the business section of the Iloilo publication The News Today. The straight-forward drop line makes up for the lack of a picture. 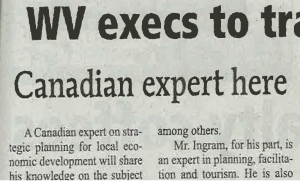 And those strategic planning sessions left a mark.  We recently heard from Andrew Farncombe, directors of the CUI’s International Division from 1994-2014 about the impact of the LED work we jointly pursued over that period:

“The early work the Canadian Urban Institute did with you on economic development in the Philippines, including the manual testing, made an early contribution to the country’s local economic development framework that has emerged over the past few years and is now promoting an explosion of collaboration between local governments and their private sector.”

So when William worked through a strategic planning sessions with Silay government officials, private sector and other stakeholders this January, the process, methods and tools used represented two-decades worth of thought, testing, and refinement. The two-day session – which we’ve started calling ‘rapid LED’ – is a condensed version of our full process, allowing participants to build on a business and community survey to quickly, but with contextual specificity, move through the main steps of visioning, issue and objective prioritization, and producing concrete, implementable action plans.  The workshop ended with commitment by key stakeholders to adopt and implement the strategy. Through the development of a monitoring and evaluation plan that was incorporated in the workshop, we will be able to follow the success of the plan over the years.