The seminar is presenting a framework applications and case studies for using multicriteria attribute theory and structured decision support to avoid impacts, mitigate for, or restore cultural services.

SEMINAR & PAPER ON THE USE OF STRUCTURED DECISION SUPPORT FOR VALUING LOST CULTURAL BENEFITS ASSOCIATED WITH ENVIRONMENTAL INJURIES
JUNE 10-12, 2020

As part of the 5th International Conference on Environmental and Economic Impact on Sustainable Development, Trousdale and Hanson present a method for scaling the value of threatened or lost non-material cultural services associated with environmental injuries based on a structured decision support (SDS) approach, which draws from decision sciences (e.g., multi-criteria attribute) and negotiation theory (e.g., interest based). It has been successfully applied in both Indigenous and non-Indigenous groups in Canada and the US. The value of the benefit of cultural services or goods is estimated by scaling “Benefit-to-Benefit” when possible. In some contexts the use of “Benefit-to-Cost” method of scaling is sometimes warranted. Neither approach for scaling relies on direct comparisons of cultural benefits with economic values.

Older residents still make about a sizeable portion of Village population. If Cumberland has young families moving in, there are still many seniors in the community. At the same meeting as a presentation on local child care demand and resources, council was presented with a report on how to make Cumberland more “age-friendly.”

The City of Surrey was honoured with the inaugural Climate Adaption award from the Community Energy Association at this year’s Union of BC Municipalities Convention. EcoPlan is a key member of the project consulting team led by Northwest Hydraulics. With a recent $76 million grant from the Federal Government through their Disaster Mitigation Adaptation Fund, the City of Surrey is moving to implement early CFAS actions.

WILLIAM TROUSDALE PRESENTS ON INDIGENOUS KNOWLEDGE AND VALUE DRIVEN PLANNING TO A FULL HOUSE AT THE WESTERN PLANNERS CONFERENCE
September 10, 2019

In a joint session with Emigdio Ballon and Gailey Morgan of Pueblo of Tesuque, William presented on the integration of western scientific knowledge and Indigenous knowledge in the context of climate change. Further he provided a case study on how Swinomish Tribal Community integrated methods derived from decision science and behavioral research with local protocols and community participation. A paper is soon to be published (contact william@ecoplan.ca if interested in receiving a copy).

In June, William Trousdale was invited to Jena University in Germany to give a seminar on Structured Decision Support and Negotiation to graduate students of the Applied Ethics and Conflict Resolution program. The introductory seminar explored how ethics, which gives “big picture” support to a decision based “Value Approach” can advance “pragmatic ethics” principles.

EcoPlan was honoured with an Award of Planning Excellence (Gold) in the Research & New Directions in Planning category from the Planning Institute of BC. Working with Northwest Hydraulic Consultants, Connect Landscape Architecture and the City of Vancouver, the Coastal Adaptation Plan – Fraser River Foreshore is one component of a larger, multi-year undertaking to determine the risk, consequences, vulnerability, and adaptation opportunities for Vancouver to address future sea level rise and flooding from the the Fraser River.

ECOPLAN WINS A 2019 PIBC AWARD FOR EXCELLENCE IN PLANNING (GOLD) IN RESEARCH AND NEW DIRECTIONS IN PLANNING
May 8, 2019

The City of Vancouver’s Coastal Adaptation Plan (CAP) – Fraser River Foreshore is a path-breaking approach to values-based coastal adaption planning. With EcoPlan’s support, the project used a participatory, values-based approach to engage residents, stakeholders, and other partners, including Musqueam Indian Band. The felt that “the plan addressed the urgency for action regarding climate adaptation, with a  public education focus and a great framework for other communities to use.”

Abbotsford has been named a Global Top7 Intelligent Community, 2019

We hope our support with your Economic Development Strategy and Innovation Forums contributed to this impressive honor:

EcoPlan’s work with the Cowichan Valley Regional District (CVRD) has recently been recognized by UBCM’s Excellence in Governance awards. Receiving an honourable mention in the governance category, the Cowichan 2050 Regional Collaboration Framework is a leading-edge statutory policy tool and collaborative approach to regional planning and decision-making. Emphasizing regional collaboration, communication, and coordination, its purpose is to address the crosscutting nature of emergent challenges faced by local governments, such as those related to climate change and population growth.

Last week, the Canadian Institute of Planners announced its 2018 award winners and EcoPlan’s work with the Nishnawbe Aski Development Fund (NADF) and the CCP Advisory Committee on the Comprehensive Community Planning Toolkit: Finding Bimadizowin has won an award! The CCP Toolkit, which is a guide and kit of resources to support better planning in Indigenous communities and key stakeholders in First Nations communities, has won the Award for Planning Excellence for Planning Publications.

ECOPLAN SUPPORTS HISTORIC AGREEMENT BETWEEN THE DISTRICT OF LILLOOET, P’EGP’IG’IHA COUNCIL (T’IT’Q’ET) AND THE SQUAMISH-LILLOOET REGIONAL DISTRICT
May 30, 2018

EcoPlan provided support for a historic agreement between the District of Lillooet, P’egp’íg’lha Council (T’ít’q’et) and the Squamish-Lillooet Regional District, signed on May 24, 2018. Over the past year, EcoPlan worked with the Intergovernmental Relations Working Group, a group composed of elected officials and staff from the District of Lillooet, Lillooet Tribal Council, P’egp’íg’lha Council, Sekw’el’wás, SLRD, and Tsal’álh, as they collaboratively drafted a Protocol Agreement for Communication and Cooperation.

WILLIAM TROUSDALE  WORK IN SUSTAINABLE TOURISM INSIGHTFUL OVER DECADES
May 23, 2018

William Trousdale has been asked to speak at the upcoming Tribal Natural Resource Damages Assessments seminar, December 4, in Seattle. The title of the talk is: Structured Decision Support: Restoration Scaling of Lost Native American Cultural Services under NRDAR.

AWARDS ARE THE CANDLES ON THE ICING ON THE CAKE
February 1st, 2017

Here are EcoPlan, getting to work on fun, challenging projects is what keeps us excited to get to work in the morning. But we’ve often commented that the ‘icing’ on the cake is the ongoing relationships with past clients, and seeing plans come to life through actions.

CULTURE: ADAPTATION AND TRANSLATION – A LOOK AT STORIES AND ANALYSIS
November 13th, 2015

Last month, William Trousdale gave a talk at the Museum of Vancouver as part of their “Built City” Series. The talk explored the challenge of translating sacred stories, cultural stories, and everyday stories into frameworks that can be analyzed and understood across cultures.

This week, the Vancouver Sun has a five-part series of First Nations economic development. The series profiles five BC First Nations and the various ways that they are gaining economic independence. From run of river power, to gas stations, logging companies, campgrounds plans for large resorts.

The Planning Institute of British Columbia (PIBC) just announced their 2015 Awards for Excellence in Planning Practice, and EcoPlan has been recognized for an silver award in the category of Research and New Directions in Planning for Planning for Climate Change: A Values-based, Strategic Approach for Urban Planners.

CAREFUL WHAT YOU WISH FOR: “MALCOLM ISLAND WINS NATIONAL PLANNING AWARD!
May 28th, 2015

This is pretty exciting. While working on an economic development plan with Malcolm Island in 2014, we did a visioning activity in which we asked community members the following question: “Malcolm Island’s Economic Turnaround Wins National Planning Award. How did they do it?”

TWENTY YEARS OF LED IN THE PHILIPPINES
March 11th, 2015

Recently, William appeared in the community events section of the Sun.Star Bacolod, a local newspaper from the Negro Occidentale region of the Philippines. He had just finished facilitating a two-day workshop on Local Economic Development (LED) in Silay City, a project funded by UN-Habitat. Here he is in action.

This recent article in Plan Canada magazine describes some interesting work we did with the Regional District of North Okanagan (RDNO). Monitoring and Evaluation (M&E) often ‘falls off the rails’ when a plan is being implemented, perhaps because it is too complex, people are too busy, or other factors.

NICE LITTLE VIDEO ABOUT SOME OF OUR CLIMATE WORK WITH UN-HABITAT
May 29th, 2014

EcoPlan recently worked with UN-Habitat and Compass Resource Management to produce the planning guide “Planning for Climate Change: A strategic, values-based approach for urban planners”.  It’s a book and a series of tools that planners in cities of all stripes.

AN UPDATE ON PROJECT WORK IN THE PHILIPPINES
May 28th, 2014

“The early work the Canadian Urban Institute did with you on economic development in the Philippines, including the manual testing, made an early contribution to the country’s local economic development framework that has emerged over the past few years and is now promoting an explosion of collaboration between local governments and their private sector.

We were approached by the Council for the Advancement of Native Development Officers (Cando) to write a quarterly article on the strategic planning process for their newsletter – ‘N-Side’.  Cando is a great organization that provides support and capacity building for Economic Development Officers in First Nations communities. 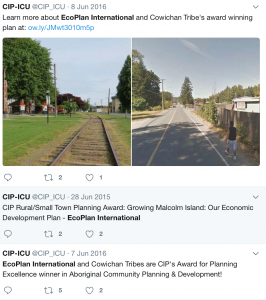