This is pretty exciting.

While working on an economic development plan with Malcolm Island in 2014, we did a visioning activity in which we asked community members the following question: 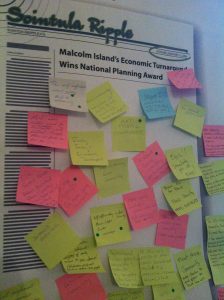 “Malcolm Island’s Economic Turnaround Wins National Planning Award. How did they do it?”

Just six months later, the project actually DID win a national planning award! EcoPlan and the residents of Malcolm Island were recently honoured with the 2015 Canadian Institute of Planners Award for Rural Planning for the ‘Growing Malcolm Island’ project.

The Canadian Institute of Planners description sums up the work and the reasons for the award:

“Malcolm Island, situated off the northern end of Vancouver Island, has a population of over 600 full time residents. Without the support of a strong local governance system, the residents, in collaboration with EcoPlan, identified a need to ignite the local economy. Using strategic planning for economic development as the driving tool, Growing Malcolm Island is an inspiring example of true community economic development. The project was initiated, led, and is currently being implemented by the community. The project may inspire communities with limited capacity of local governance to take their future into their own hands. The Jury gave this project an Award of Excellence based on the plan’s grassroots approach to bring disparate groups together in support of a local economy.”

Congratulations to the residents of Malcolm Island and thanks for all your hard work on this project.